Relive the dawning of the Age of Aquarius on Saturday, Aug. 11 as 4 Degrees Brewing Company hosts an outdoor concert and hippie costume party.

Frost & Wood-Stock, scheduled for 5 to 9 p.m., is also a fundraiser in support of children’s summer programming at the Smiths Falls Public Library.

Audience members are urged to break out the bellbottoms, tie dye and beads, and prizes will be awarded for best costumes.

Live entertainment will be provided by The British Invasion, with special guests Ian and Chris, and Josh Taylor-Brown.

Doors open at 5 p.m., and entertainment begins with an hour of acoustic guitar music and songs by the duo Ian and Chris, who also host a monthly open mic night at 4 Degrees.

From 6 to 9 p.m. the three-piece British Invasion show band will present music by British artists including The Beatles, The Kinks, Eric Clapton, Gerry and The Pacemakers, the Searchers, Herman’s Hermits and many more. The show will also touch on some of the blues and early rock artists who first inspired The Beatles and Rolling Stones.

“It’s not just a concert, it’s an experience,” said drummer Gord Logan. “Audience participation is very important to us.” 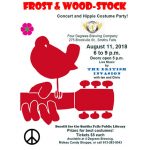 The band features experienced musicians Phil Morotti on lead vocals and lead guitar, Chris Must on bass, vocals and guitar, and Gord Logan on drums. Accomplished lead guitarist Morotti has been playing for over a decade with numerous bands. He draws inspiration from many styles of music, but sings and plays mostly classic rock and rock ‘n roll. His improvisational abilities guarantee a fresh take on each song at every performance. Logan is a multiple Juno Award nominee whose musical career began as a professional drummer for various Toronto-based groups. As a freelance studio session player in the Greater Toronto Area, he took part in studio recordings, TV shows, and concerts. Must, a native of England, was inspired early on by the music of the Beatles and the Rolling Stones. In numerous musical projects over the years he has played bass, guitar, and harmonica.

Josh Taylor-Brown, a blues-rock guitarist who is home for the summer after studying music in France, will be featured as a guest on some classic Jimi Hendrix songs, in a tribute to the original Woodstock Festival of 1969.

“We are thrilled to see another event benefitting the library at our brewery,” said 4 Degrees Manager of Operations Jeff Murphy.” We hope to see a large turnout in support of a great asset to our community.”

This event was made possible through the support of the Smiths Falls On the Roll Music Series.

John Perrin was a member of the team of carpenters who built the Keyhole House in Smiths Falls in 1892. During its construction, he left his signature on the back of a door frame in a second-floor bedroom. The following year, John married Annie Weekes. Tragically, seven months later at the age of twenty-seven, John […]