With obvious nervous anticipation, the collection of avid election watchers in Carleton Place town hall upper auditorium waited until well after the polls closed to see some indication of what political winds were blowing.  On election night (Oct 22), the upper hall’s attendance grew and subsided until only a small faithful group remained at 11 pm.  Approximately 200 sat, chatted, and watched the projection screen to view updates from town election staff.  Even front runners such as incumbent councilor Theresa Fritz expressed concern about a successful outcome (in fact her number one position in the polls didn’t change throughout the evening ending her up with a total of 2,440 votes which will in all likelihood become a new record). 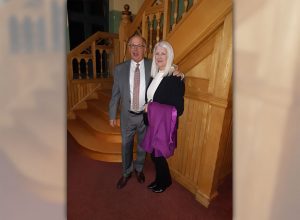 When the first results were posted (from online and phone-in voting) the audience erupted in applause and cheers as these virtual polls gave mayoral candidate Doug Black a commanding 5:1 lead over incumbent Louis Antonakos, who even garnered less votes than local lawyer Ralph Lee.  Mayoral and deputy-mayoral races’ reports were posted early in the evening and kept incumbent councilor Sean Redmond in the lead in a tight race with lawyer Craig Rogers and resident Rae Dulmage.  In the end, Redmond was victorious with a comfortable mandate of 1,603 votes over Dulmage with 1,371 and Rogers with 1,233.

Antonakos ended the evening with only 635 votes, Lee took 1,002, Roland Wutherich had 44, and Black earned a commanding 2,578.  Town deputy-clerk Stacy Blair pegged the turn-out at 55%, the highest number in years. 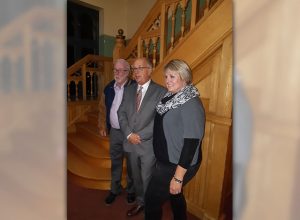 As advanced and election-day polls rolled onto the reporting screen, the councilor race showed some early strong performers such as Fritz, Linda Seccaspina, Andrew Tennant, and Toby Randall.  These four ended up certain to win early in the counting.  But it took until almost the end to decide the fifth and final council seat with Jeff Atkinson edging Wes Parsons by less than 50 votes.  The official tally ended up with Fritz at 2,440, Tennant at 1,991, Seccaspina at 1,829, Randall at 1,799, and Atkinson at 1,687.

Antonakos wasn’t present at town hall during the evening, but most other candidates were (some coming and going to victory parties), along with family and friends.  Mayor-elect Black had the biggest smile at the end of the night as he predicted strong performance from a solid team over the next four years.

In 1873 McGill University granted its first Engineering degrees which at the time were known as Applied Science. Robert James Brodie (1851-1938) was one of only six scholars to be awarded this recognition. To this day he remains a McGill posterboy. Photographs of the bearded, Chateauguay-born, Fenian Raid veteran, grace the walls and website of […]

When Reginald Burroughs moved into the Keyhole House, he left his mark by signing his name, his son Nelson’s name, and the year “1907” into the wet concrete of a basement windowsill. The family’s new three-digit phone number was 218, and they were listed in the Smiths Falls Telephone Directory as R. E. G. Burroughs […]

Agnes Lamb was a wealthy woman when she died of tuberculosis in 1903 at the Keyhole House. The 60-year-old spinster left executors of her estate with some very clear instructions. In her will, Agnes set aside $1,000 as an investment with the Molsons Bank. She asked that the interest be used to maintain the Wood […]