No longer will Smiths Falls be known just for hockey if Joe Shadoue and his brothers have anything to say about it. And Shadoue is not shy about talking.

He talks baseball — he thinks it, he coaches it, he plays it, it’s in his head all the time — and he’s happy about that. He and his brothers, plus a lot of volunteers, coaches, parents and spectators — are behind a renaissance in little league baseball in town. Shadoue even thinks a good slogan for the town could be “Baseball in the summer. Hockey in the winter,” as little league begins to explode. Who can say Wayne Gretzky is wrong, he asks, because that’s what he used to do.

Baseball faded out of Smiths Falls’ consciousness about 15 years ago. When that happens and only a few are interested, kids go elsewhere to pursue a sport they love. Players got eaten up by the small towns around them. When it came back to anchoring the game once again in Smith Falls, the first thing Shadoue did was apply for a charter. And he got it.

A charter allows a claim on a district, Shadoue explains. It’s a geographical chunk of land from which to draw kids. Smiths Falls is part of District 8, and includes (among others) the Smiths Falls, Jasper, Lombardy, Newboyne, Forfar and Crosby; it doesn’t include Franktown, Rideau Ferry, Newboro or Burritts Rapids.

As Smiths Falls faded out, other small towns absorbed players. But once the charter came into being, boundaries were re-established. “We took our players back,” Shadoue says with a little grin.

This year Smiths Falls had 70 players, and Shadoue expects that number to double next year. He’d like as many as 180 players, because the more players you have, the more teams you can field. For instance, Kingston draws from a pool of 600 for its competitive summer team. The inner-Ottawa teams have a much bigger resource than even 600.

And when he says players, he’s not just referring to boys. There are many girls that play little league ball, and excel. “I’ve coached girls who are phenomenal…they’ve kicked the crap out of the boys who play,” says Shadoue.  Andrew Stoll, who coached the junior competitive team this year, agrees. He had one girl on his team this past summer and was deep-down thrilled when she chose to play baseball rather than hockey over the summer.

This past summer was big for Smiths Falls, as this year teams played under the name of the Smiths Falls Stars and made some big wins. The juniors finished of their season with an impressive silver medal and the majors were district 8 league champions. And both teams won their divisions at the Scott Tokessy Memorial Gold Glove Tournament. The Tokessy tournament the biggest charity baseball tournament in Canada. 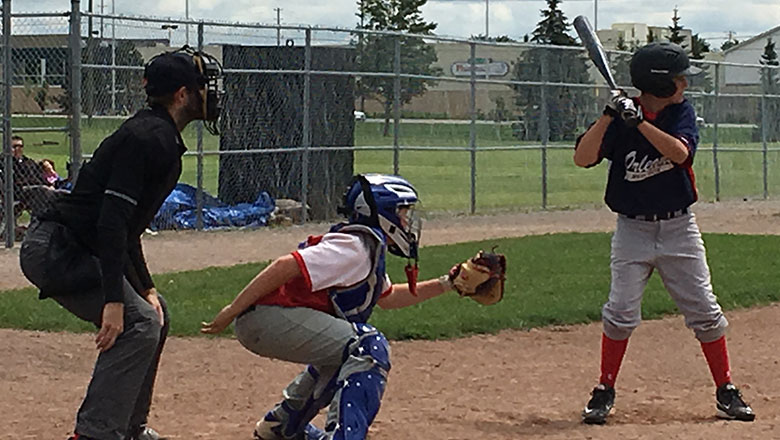 Last year, some of the same players and coaches played — and won — their divisions of the charity tournament but under the banner of the Perth Royals. These 2017 wins were firsts for the new Smiths Falls Stars.

Baseball season ended at the end of August, and there  was some talk about fall ball, but that hasn’t gotten off the ground yet says Shadoue.

There will be winter training, though, at the Smiths Falls District Collegiate Institute gym – drills, hitting, pitching, base running.

Shadoue and Stoll coach because they love the game and they like the kids. “Kids are kinda like a little drug sometimes. Spending time with them is super refreshing,” Shadoue says. “Dealing with the parents is tough,” he adds, a bit tongue-in-cheek.

There are two reasons why Shadoue and Stoll spend so much time thinking, talking, planning and playing baseball: the kids and this town.

“If no one showed up and no one cared and no one was having fun, it wouldn’t happen,” Shadoue says. But when week after week kids and parents keep coming back, “it gets infectious. Baseball is a mechanism for doing good all over, it suckers you in.”

His motto this year was “effort and fight.”

“There’s a lot you can’t control in baseball, like the umpire, mistakes, a thousand little things. But these two things you have 100 per cent control over.” Put in the hard work, don’t give up. “These things don’t stop on the baseball diamond; they follow you through life.”

And, the Town of Smiths Falls could certainly reap financial benefits from little league baseball, especially if “56 teams show up for a tournament,” Shadoue points out. “Tournaments are the way to go.”

For information about teams, fields, sponsorships, volunteering and anything else you want to know about Smiths Falls Little League, go to the website (http://www.sfll.ca) or get in touch with Shadoue or others from the league.

In 1886, the construction of the Canadian Pacific Railway yards in Smiths Falls, Ontario created some incredible business opportunities. Matthew Ryan was a local carpenter who took advantage of the situation to make his fortune. He quickly branched out to become a dealer in lumber and shingles, a manufacturer of brick, a contractor, a buyer […]

For twenty years, Agnes Lamb lived in what was considered to be the finest mansion between Montreal and Toronto. Alexander Wood’s “Glenwood” Mansion was built on Chambers Street in Smiths Falls in the early 1870s and absolutely no expense was spared. This immense structure was built of imported white sandstone and featured a multi-coloured slate […]

On the road again. At least that’s what Fred and Sue Gieratz plan when they sell the business they’ve been in for 27 years. The couple have catered to the sewing, knitting and quilting clientele, running Sew Crafty, now in the heart of Rideau Ferry. They’ve put their property and business up for sale, surprising […]