Anything you ever wanted to know about garlic was there for the asking Aug. 12 – 13 in Perth. Set up on the fairgrounds, there were upwards of 75 garlic growers, sellers and their offshoots – like garlic fudge and garlic ice cream.

Crowds were smaller on Saturday than Sunday, and many made a dash into the Lions Hall building when the skies opened up about 3 p.m. on the first afternoon.

Those rambling amongst the kiosks were treated to live music both days – Blue Skies Fiddle Orchestra on Saturday and Still Kickin’ on Sunday.

The Birds of Prey show attracted many onlookers (as always). Sadie was attentive to her handler and flew back and forth from roost to gloved arm, also settling on a bystander’s shoulder. Sadie is a carnivore, which means she captures dinner with her feet. William, the Great Horned Owl kept an eye on the whole crowd as he slowly turned his head from side-to-side. Food on site was delicious.

Mike Sparling, of Sparling Natural Foods, with partner Kate Scale, took time to trim garlic bulbs before selling them. Joyce from Perth said – after a few good licks – that while the ice cream was good, she couldn’t taste the garlic.

Inside, a silent art auction drew curious viewers, cooking demonstrations filled the hall with good smells, and Top Shelf Distillers and Perth Brewing Company served up samples of locally made liquor and beer.

Families and individuals walked away with garlic bulbs, garlic braids and garlic bunches; it was an aroma-filled, colourful afternoon. 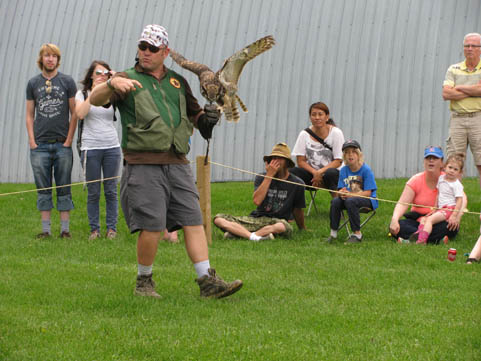 Sadie kept audiences mesmerized at The Birds of Prey demonstration in Perth. 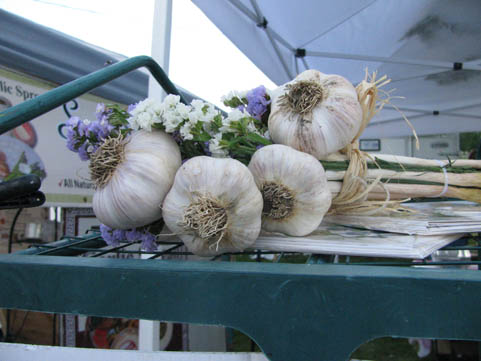 Everywhere you looked, there was garlic on display. 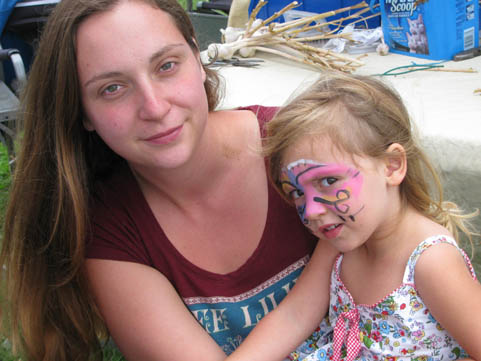 Ruby Grigaliunas, 3, and Robyn Reed were two of the many garlic lovers that enjoyed the festival. 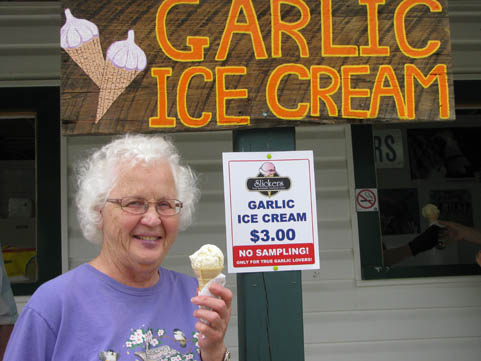 Joyce of Perth said the ice cream was good but she couldn’t taste the garlic.