On Tuesday, Jan 15, Carleton Place council convened a special meeting of their Committee of the Whole to introduce the 2019 municipal budget.  Town treasurer Trisa McConkey made a short presentation outlining a proposed 9.4% revenue increase almost equally split between two sources; growth from new development and a rate increase.  The town is planning on a total of $10.9M in income from the municipal tax portion and fees versus $10.0M in 2018. 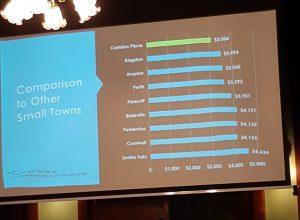 McConkey explained that for the average home assessed at $257K, its owners would experience a $65.50 increase compared to the previous year.  She provided a comparison to other area municipalities noting that Carleton Place came in with the lowest taxes of $3084 (for that average $257K home).  Arnprior came in at $3540, Perth was $3593, and Smiths Falls was $4634.  She noted that the two largest expenses on a homeowner’s tax bill were police services at 22% of the total and road infrastructure at 17%.  She remarked that comparing Carleton Place taxation levels to Ottawa was unfair as that large city benefitted from economies of scale that no small or medium sized municipality could match.

Mayor Doug Black reminded council members that this deliberation process was their opportunity to bring up requests for any special initiatives they would like to see funded and completed in 2019.  He mentioned former councilor Gary Strike’s project to install a memorial cairn on the north side of the river and former councilor Rob Probert’s tree planting project in memory of local veterans as examples. 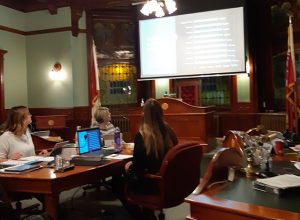 Local resident Jim Collins asked the committee about budget plans for three areas; arena upgrades, central bridge replacement, and hospital funding.  Chair councilor Theresa Fritz responded that these would be discussed in detail at upcoming meetings.  McConkey replied that $1.5M was in the proposed budget for the arena with $1M of that coming from reserves and $500K from new debt.  She added that $500K was planned for the preliminary work on the bridge project in 2019.  Black noted that he was meeting with hospital officials on Jan 16 to discuss their plans.

The plan on budget discussions will see department heads making detailed presentations to council over the upcoming weeks with the next planned public meeting set for Feb 19 aiming for final approval by March 5.