On Tuesday Dec 18th, the Carleton Place council held their inaugural Committee of the Whole (CoW) meeting to a full gallery.  Newly named committee chair, councilor Theresa Fritz (appointed till May 31 2019) apologized at the end of the session for a few procedural bumps, but overall it was a well run meeting.  Two public delegations made presentations and a very full agenda was completed in just under an hour and twenty minutes.

Erin Lee of Lanark County Interval House provided and update to council on her organization’s work over the last year and preparations for their upcoming 40thanniversary in 2019.  She reminded everyone at the beginning of her presentation of the opening words of their mission statement, “We believe that a woman and her children have the right to live with dignity and without the threat of abuse. When this right is denied or interfered with, we will provide protection and support.”  She noted that Interval House serves an area with a total population of over 66K and that the predominantly rural setting of this catchment provides unique and severe risks to women and their children such as isolation and higher chances of being threatened with a weapon.

Last year they answered over 2,000 crisis calls and hosted 107 families in their residential centre.  Lee noted that the newly created 4 units of second-stage housing were full with a waiting list.  She brought council the news that Carleton Place was recently selected as one of four Ontario communities to receive a public art installation, at no cost, in tribute to the much needed work that facilities like Interval House are tasked with and those at risk they serve.  She informed the audience that a group of artists would visit the town in March of 2019 to consult with staff and stakeholders to design the work and it would be installed in May.  Lee hoped council would permit it to be located in the small green space next to the town hall along the river.

The Central Bridge project was back on the committee table and it brought a presentation from resident Mark Smith who noted that the projected width of the vehicle lanes was insufficient for safe cycling and that the town should take the opportunity of its rebuild to address the issue of contaminated storm water run-off entering the river just under the bridge.  He suggested that an interceptor system could be installed for a relatively modest amount (compared to the total $7.7M project total) which would help protect the watershed.  In the end the committee voted to move forward with the project version that would see preliminary studies and planning begin in 2019, with the actual bridge work being completed in 2021.  As was reported earlier this would entail approximately 9 months of pedestrian and vehicle detours while the bridge is out of commission. 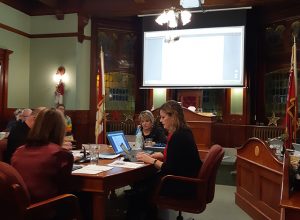 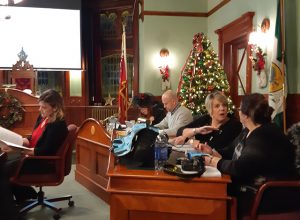