A head of full, dark brown hair shining under bright lights above. The luxurious locks are carefully sectioned into 24 ponytails, and then one by one, those ponytails are snipped off.

Attached to what’s left of this head of dark brown hair is Michèle Frenette, a hairstylist at Mahogany Salon and Spa in Carleton Place. Frenette, 24, shaved her head on Feb.7 at the salon to raise money for the Canadian Cancer Society.

“There’s no point being nervous to shave my head because it’s still happening. If I had cancer I would have to accept it anyways,” said Frenette. 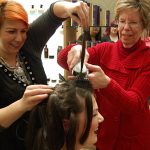 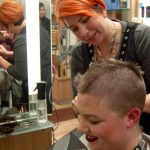 Michèle Frenette has her head shaved by Nicole Lachapelle for cancer research. 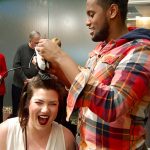 She decided to raise money for cancer research since her aunt, Cynthia Sirett, 69, is receiving chemotherapy treatment for cancerous cells found in her lymph nodes.

“She helped raised me. I’ve never seen her cry my whole life. At Christmas she took off her wig and she cried,” Frenette said. “She didn’t like that she was bald. She thought she didn’t look pretty. I figured I would shave my head – it’s the least I can do. And I might as well raise money at the same time.”

Frenette’s campaign raised $1,180 in total. “The fact that we raised money at all is what I’m happy about,” she said. Donations were made in-person and online at Mahogany Salon and Spa in Stittsville and at the Carleton Place location throughout January.

To raise even more money last night, Frenette auctioned off the 24 ponytails. The person with the highest bid got to cut one of the ponytails off. The highest bid for one ponytail was $55.

Frenette’s aunt, mother, boyfriend, friends and many salon colleagues were at the event to donate.

“I can’t imagine the strength that someone has to have to go through chemo. I’m just shaving my head. It’s just hair,” Frenette said.

After the event,  Frenette posted on her Facebook page: “Thank you so much to everyone that helped make tonight happen. One of the many, many reasons I tell people I love where I work is because of tonight. I bring a crazy idea like shaving my head to a salon of all places and everyone helps to make it happen.”

Donations will go to whichever cancer currently needs the most funding since it’s unclear what kind of cancer her aunt has.