Downtown Carleton Place’s Let’s Play initiative has hit just the right note in its effort to draw people to the heart of the town.

During the Canada Day long weekend the local organization installed two artistically painted pianos in the downtown core: one in front of their offices on Bridge Street and the second on the patio of Town Hall Square on Mill Street.

The idea is to provide a piano that anyone walking by can sit down and play a tune on or simply delight in running their fingers across the keys.

“Play as long as you like,” Murray later added. “They’re there for feel good energy and fun”. 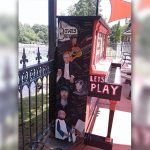 The idea originates in Britain where artist Luke Jerram has launched Play Me, I’m Yours in 2008 and has since gone world wide. The pianos are at once a musical instrument and art installation as they are wildly painted with a variety of themes. Murray came across Jerram’s program and thought the Carleton Place community could certainly take this concept and make it their own, which it has since the first call out for piano donations on Facebook.

Local businesses donated their services and products to bring the pianos to the DBA and area artists MJ Lancaster and Jennie Stratton went to work on bringing out their Let’s Play personalities. Bridge Street’s piano is a nod to the beautiful flower baskets that adorn the downtown each summer, while the Town Hall Square piano brings to life the musical talent of the area with countless portraits of local musicians. This piano is a fantastic space for families or friends to bring a picnic and jam on the piano. Murray said the hope is that these pianos will help to build downtown Carleton Place memories for residents and visitors, and they are asking everyone to share those memories with them as part of the Let’s Play launch. 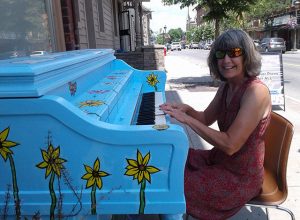 Sitting down at the Downtown Carleton Place’s floral inspired community piano instantly put a smile on the face of Linda Yeremian. The Let’s Play piano was a delightful welcome to her new community. She and her husband moved to Carleton Place over the Canada Day long weekend when the community pianos were installed. Everyone is welcome to sit down on Bridge Street or at the Town Hall Square and play to their heart’s content. Photo credit: Stacey Roy.

From July 9-20 Downtown Carleton Place will be collecting photos of people playing the piano or jumping on the two hopscotches that were also recently installed on Allen Street in front of the Queen’s and just across the bridge in front of Carousel. The organization is asking people to load their pictures onto the Downtown Carleton Place Facebook page for a chance to win a large floaty from Apple Cheeks or a Stalwart group tasting experience for 10 people.