Carleton Place teenagers are being encouraged to participate in a Youth Ambassadors Program, a three-week exchange that would allow them to join fellow students aged 15 to 18, along with adult mentors, on a summertime journey stateside. With a focus on civic education, social inclusion, community service, youth leadership, and citizen-engaged participatory democracy, the intensive program runs July 17 to Aug. 6.

In partnership with the Center for the Study of Canada at the State University of New York at Plattsburgh, this year’s program will feature a two-day orientation in Ottawa, followed by educational experiences in New York State, including Adirondack Park, from July 19-30. An additional week will be spent in Washington, D.C., after which youth ambassadors will apply what they learned to implement community service projects that meet social needs in their own towns. They will also follow up with mentoring, networking, and alumni network initiatives.

The exchange is being promoted by Carleton Place’s energetic Sister Cities Committee, which for over two decades has paired with such distant destinations as Comrie, Scotland, and Franklin, Tennessee. Jean Knowles, one of the founders of Sister Cities, says “It’s wonderful to see the transition from when the kids meet each other and their host families at a welcome barbecue, and everyone is very shy. But by the time of the farewell, those occasions are a lot louder and the kids have formed lifelong friendships.”

It was the committee’s connections with Franklin, located a short distance from Nashville, that allowed rising Carleton Place singer/songwriter Brea Lawrenson to get a foot in the door in Music City.

“These exchanges are really valuable opportunities to give young people an idea of the similarities and differences in our countries, and an appreciation for what we share in common,” says Knowles. She adds that most exchanges take place during the school year to provide students with differing perspectives on education. “That tends to be one of the biggest eye openers. The kids who come here cannot believe the freedom our kids have; they say it isn’t as structured and regimented as they face back home.”

Sister Cities organizes a number of annual fundraisers to support their work, including the annual Heritage Ball and the popular Win’d Around Downtown extravaganza, a wine and food tasting experience with participating downtown restaurants. This year’s event, on Saturday, May 27, will feature a Canada150 theme as participants purchase a T-shirt that serves as an entry pass to the pubs, grills and cafés serving special beverages and hors d’oeuvres.

While a major focus of Sister Cities is youth connectivity, the pairings have also inspired such annual events as the giant pumpkin switch. Each fall, Carleton Place and Franklin exchange a giant squash for local harvest competitions where community members guess the weight of each entry.

Applications for the Youth Ambassador Program, which seeks “energetic and mature applicants who are ready to advance their skills to be effective leaders in their schools and communities,” are due by March 30. Students graduating in June are ineligible to take part. Adult mentors who will chaperone the students are also welcome to apply, with further details at http://web.plattsburgh.edu/.

Photo Caption: Carleton Place students welcome friends from Franklin, Tennessee, who were delighted to discover there is more than one Mississippi River into which they could dip their feet. Photo Credit: Amanda Charania. 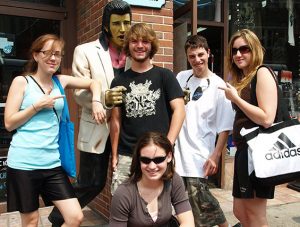