In a recorded vote, a motion to rescind the motion regarding angle versus parallel parking made by the previous council in February 2018, was won 4 to 3 Monday evening in Smiths Falls’ council chambers; those voting for were Councillors Alford, McKenna, Allen and Mayor Pankow. Those voting against were Councillors Brennan, McGuire and Dwyer.

In a second recorded vote council approved the “Complete Street design for Beckwith Street re-development and directed staff to conduct an analysis of the detailed design choice of the arrangement of the cycle lane, sidewalk and streetscape zone and to provide council of the findings of the analysis.” Those voting for were Councillors Alford, McKenna, Allen, McGuire and Dwyer, and Mayor Pankow; Councillor Brennan voted against. 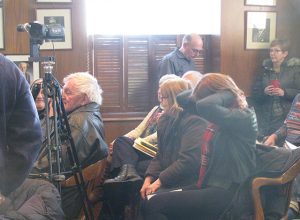 Smiths Falls council chambers were packed Monday night for the debate on whether to rescind the angle versus parallel parking motion made last year. Photo credit: Sally Smith.

The debate was long and arduous. Councillor Alford said she had, again, read through the research from the previous council’s vote, and that, in her opinion, it was an even split between Option 1 and Option 2 but that Option 2 came in at $130,000 less than Option 1.

Mayor Pankow asked Ron Clarke, a consultant with Parsons, the company that developed the downtown Smiths Falls plan, about snow, and exiting cars, and accessibility with parallel parking. Clarke spoke about accessibility for people with all abilities with a wider parking bay (wider dimensions); he also commented about travel speed i.e. a parking bay would not be placed along a freeway nor along an 80 km speed-posted highway. “It’s very common to have parallel parking on a low speed roadway (as is Beckwith.) Speed is quite important. This is why it’s so popular and so much the normal approach to parking.”

TroyDunlop, Director of Public Works and Utilities, added that removing the parking meters would “increase efficiencies tenfold” when it came to snow removal.

Councillor McKenna emphasized that the people of Smiths Falls voted in a new council and were looking for “a change, an approach that was fresh and different.” It’s this council, he added, that was sworn in to put the budget together and secure the funding for that, to oversee staff’s procurement and tendering of that work, and to oversee the ongoing construction. The responsibility will rest on this council for the bulk of that work.

“To do my due diligence I felt it was important to take a second look.”

Councillor Allen commented she felt the Complete Street option was better for this community. “The decision I make is around who I’m going to be as I age. This is my town…I’m going to die here.”

Councillor Dwyer admitted she wasn’t prepared for the emotional reaction of the debate, but stood steadfast in her opinion; she disagreed with revisiting the discussion now. There is a general consensus, she said, that it’s not legal to revisit — the legislation does not allow us to revisit or rescind the decision of a previous council. In fact, she added, “it is. You do not need two-thirds majority and you do not need new information.” She added she didn’t feel there was any malice in undertaking this action now.

She suggested a caveat — alter the design so the bike lane and the sidewalk are paired together and the buffer of furniture and vegetation frame the parallel parking space. With this, she said, it would be a more useable and active transit lane separate from the vehicle traffic.

She also suggested research into cycling lanes in small rural towns. This, she said, according to her research, has been “exhaustively unstudied.” She wants a “partnership with a think tank” so others can learn from the experience, and a commitment to make alterations, if needed.

Councillor McGuire said he would not vote to rescind. His concern was to make the street available and useable for everyone — those in wheelchairs, those with walkers and those with visual impairment.

Councillor Brennan said straightforwardly he would not support the vote to rescind. “In my view, it’s not right.” But he did add there’s “some fence-mending to do.”

Dunlop commented that the implication of changing to a Complete Street design was “five weeks” to implement and “could relate to a maximum cost of $60,000.”