Construction on Conlon Farm Recreation Complex commenced in 1988, and long-time softball enthusiast Neil Fennell watched closely to see if his dream of Perth hosting a tournament for competitive teams might finally come true through the availability of suitable facilities.

Soon Fennell thought he had his answer, and he began to educate himself on the current state of the game by attending tournaments and talking to team members and management all over North America. His discoveries led him to believe such an event would work in Perth, and the organizational machine that became the Perth Invitational Fastball Tournament committee was born.

The two core assistants from the start were Janice Sullivan and Carole Fuller, both chartered accountants, and softball fans in their own right. The women remained with the committee all 12 years of its existence from 1990 until 2001.  Sullivan passed away in 2008, the same year Fuller was given the Lanark County Award of Excellence for Volunteers. Fennell is quick to point that his wife Connie and daughter Melissa also helped and supported him and the tournament “through thick and thin” all those years.

Fennell said his goal was to “provide world-class fastpitch softball entertainment within a family-friendly, alcohol-free environment. You can reach your sporting goals without promoting alcohol consumption.” There were many who disagreed a ball tournament could take place without the omnipresent beer tent.

Leading up to that first tournament in 1990, almost no one outside Perth had seen the progression at the Conlon Farm facilities, and remarks filtering down from inside the North American softball community indicated these elite teams were really just wondering how big the cow pasture was.

“Year one, 1990, I think we planned a one-year tournament to showcase Conlon Farm Park and fastpitch softball,” mused Fennell when we talked recently. “The opening of Conlon Farm Park served to showcase a fabulous sports facility within a small town setting.” Fans would flock to that first event to fill the bleachers and set up hundreds of lawn chairs in the surrounding area. Bringing back a sport most had played growing up in small town Ontario had struck a chord across the region.

Fennell went on to say that “Few communities could boast such a multiple-use sports complex.” Although the finishing touches were not on Conlon Farm that first year, fans and teams alike were so impressed that the number of teams wanting to enter the tournament increased each subsequent year. Fennell and his committee succeeded brilliantly in showcasing the Town of Perth, the Conlon Farm facility, and the sport of fastpitch softball.

“Success breeds success, and year two was put together as one of the events around Perth’s 175th anniversary. From then on one year lead to another as we built on our success.” Fennell noted that in later years the event became known as the “Perth Fastball Shootout.”

A small committee of no more than 10 people managed to stage the events, with up to 150 volunteers assisting on the tournament weekend. They had secured funding by sponsorship from community service groups and small business, with additional monies raised through car washes and barbeques.

“We gave our tournament profits to local charities and started over next tournament,” said Fennell. “I travelled to tournaments across North America and communicated with teams and fans year round. The tournament’s success lead to International Organizations requesting an opportunity to compete in Perth. Some examples are: New Zealand (multiple tournaments); Australia (1996); Denmark (1999); Canadian Men’s National Team (1996); and U.S. Men’s Pan-Am Team (1999). The event simply was viewed as one of the finest fastball tournaments anywhere in North America.”

“Over 12 years we stayed the course and brought to Perth many players and fans who might otherwise never visit the Town of Perth,” he added. “The park withstood a real test each tournament weekend. Conlon Farm’s two slowpitch diamonds were converted to fastball diamonds.  The grounds were cleaned and cut, bleachers brought in, tents went up, and sound systems put in place. Ron Harrison and Cogeco Cable were great supporters, and for years a team of people from Cogeco filmed the games and made available for public viewing.”

The proverbial end of the good thing came after the 2001 tournament.

“Fatigue, and a feeling that we as a small dedicated group of community volunteers have accomplished more than we could ever hope, decided to move on,” said Fennell.

More than $130,000 had been raised for local charities, with the single largest beneficiary being Lanark County Big Brothers/Big Sisters. “A large part of the fundraising was with the help of Paul Martin and staff of Coldwell Banker Real Estate,” Fennell added.

Fennell still counts some of the world’s most outstanding fastball players as close friends, including Canadian pitcher Brad Underwood from Owen Sound, who was considered one of the best players in the world, and Mark Sorenson, who captained the New Zealand national team, the Black Sox, from 1989 to 2001, and again in 2004.

If you are interested in the present-day operation of Conlon Farm, stay with us and next month we’ll hear from Shannon Baillon, Perth’s current director of community services. 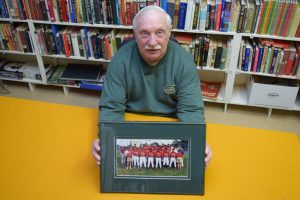 First appeared in May Edition of Hometown News