Crossing guards become a staple in their communities

Crossing guards are among the most visible signs of a caring community. In all types of weather, they diligently work their daily split shifts at key intersections to ensure students, parents, and other community members are able to safely navigate journeys that could otherwise pose peril due to red light runners, road rage, and distracted drivers.

Hometown News reporter Matthew Behrens spoke to a number of Smiths Falls and Perth crossing guards to understand what motivates their daily commitment and what they miss the most when schools are closed for the summer. 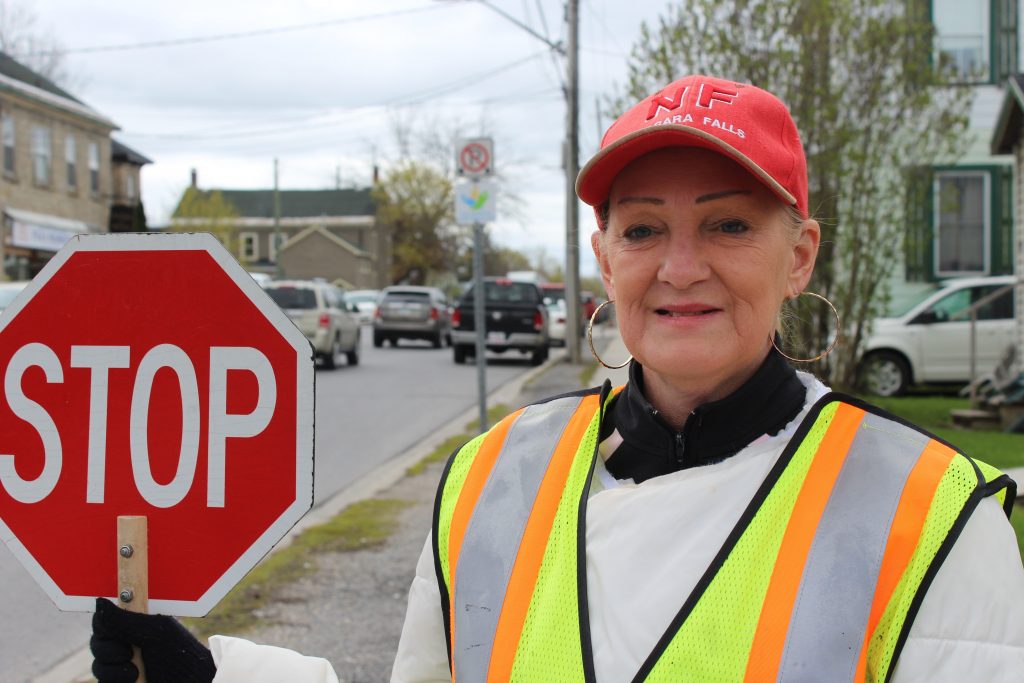 Peggy-Ann Reid is finishing her first year with her orange cone and stop sign. After moving back to Perth following a 22-year stint in New Brunswick, she says the occupation comes naturally to her given former jobs as a school bus driver and daycare worker. “I think it’s caring and being alert and meeting people that are things I really like about it. I know I’ll miss seeing people every day during the summer, but I hope they’re still out and about when I come downtown.” Reid never worries about the extremes of weather, keeping a close eye on the Weather Network to choose her clothing. 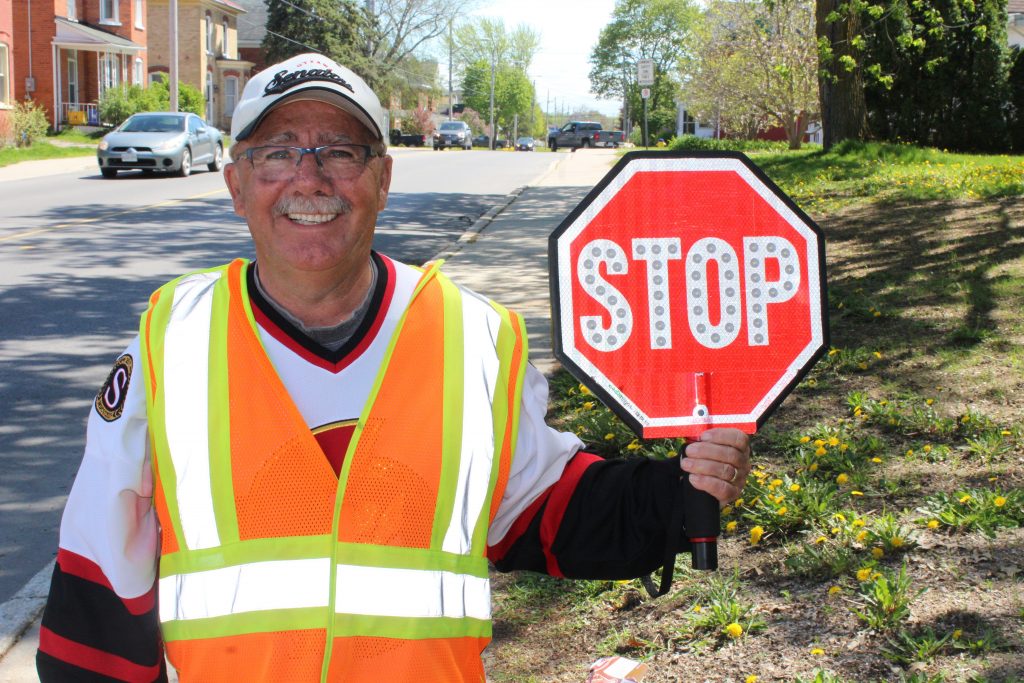 Gary Lackie is a Smiths Falls institution, known for waving and smiling at drivers and pedestrians alike for the past seven years. Born and raised in Smiths Falls, he celebrated his 65th birthday on June 1 and a 42nd wedding anniversary in May. After 39 years working as a maintenance mechanic and a stationary engineer at the Perth & Smiths Falls District Hospital, he was looking for something else to do. “I love being outside. It’s all about meet and greet, getting to know the kids, when their birthdays are, who are their parents,” he says. “The kids keep me young, and they know if they have something to talk about, there’s this old guy on the corner they can talk to, and it’s just between the two of us.” After Lackie returned from a February Florida vacation a few years ago, he recalls being stopped by a trucker who drives through town twice a week. “Sir, are you ok?” the trucker asked. “Where were you? I looked for that little wave and smile, I was worried about you.” 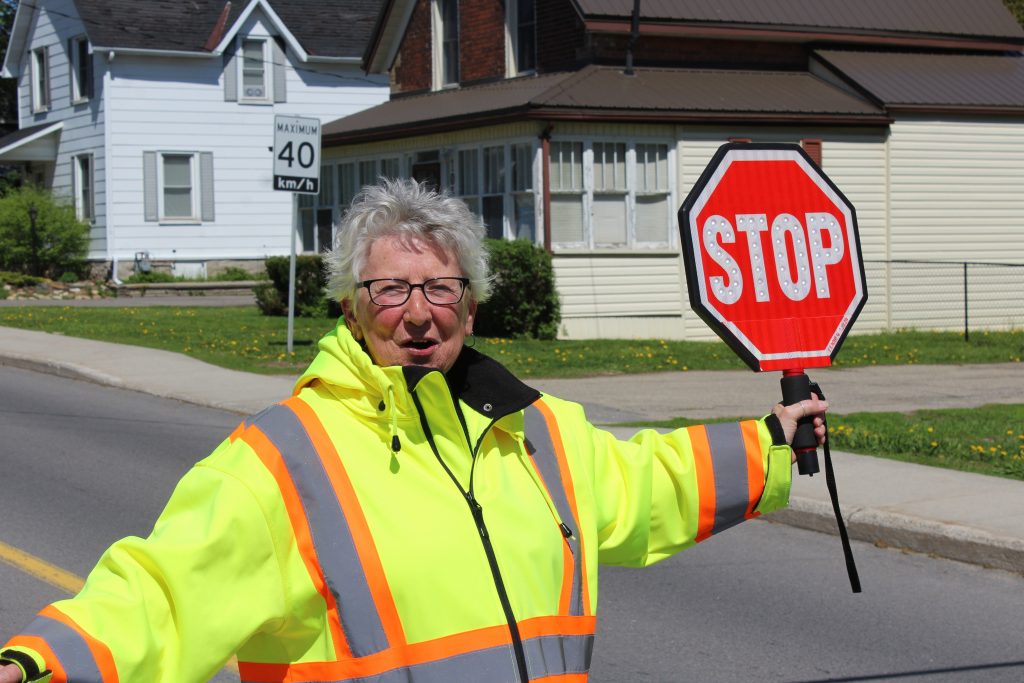 Mary Lyn Durant has been working as a Smiths Falls crossing guard for seven years. After she was laid off when the Stanley Tools plant closed in 2008, and her sister alerted her to the help wanted ad in the local paper. “It’s close to where I live, and it gives me a purpose to get up in the morning and get out of the house,” she says. Durant tries to remember all the names of the children, and they see her as a special person in their lives. “The other day this boy Anthony handed me two handfuls of dandelions,” she laughs. “Sometimes a parent will drive by and bring me a hot chocolate,” an acknowledgement she especially appreciates on days when bad drivers give her the finger. While Durant, who also does lunch duty at St. Francis, says she misses the interaction with children during the summer, she also misses the pay cheque. Unfortunately, the guards do not work enough hours during the school year to generate summertime unemployment support. 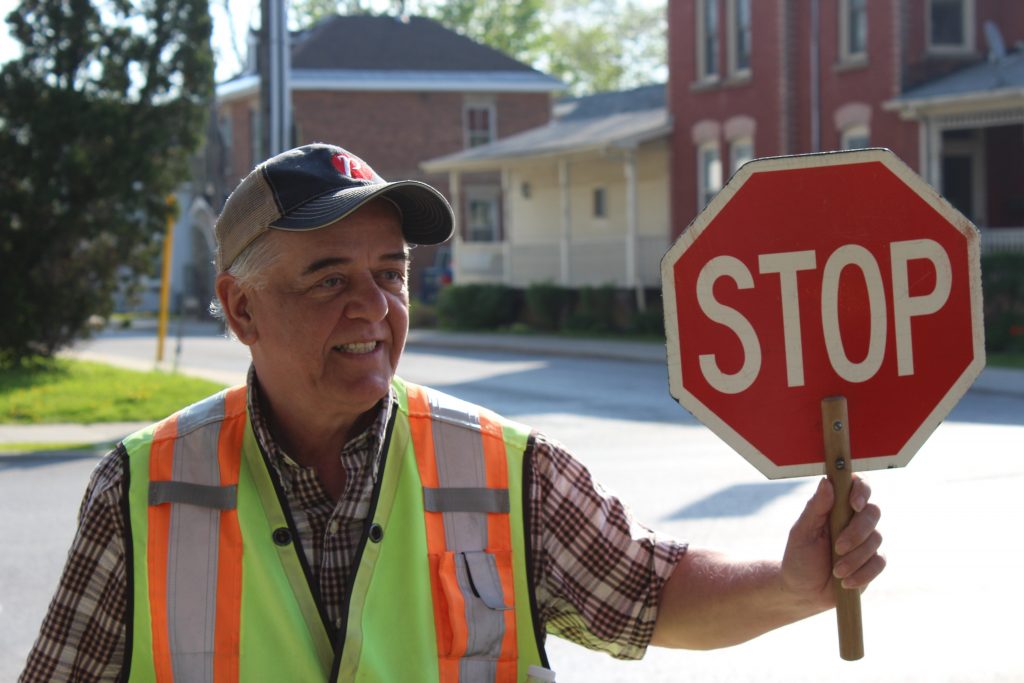 Peter Krissilas of Perth, who originally hails from Athens, Greece, has been hoisting his stop sign for two years. “I like to help the community and make sure the kids cross the street in a safe manner,” he says. In the summertime, “I miss the kids and parents and other people who walk by and say ‘Good morning, it’s a beautiful day.’ It is great socializing time. We get to know each other and I miss this. It is an opportunity to be active.” He says cold or hot days are irrelevant to him. “The cause is so great that the weather conditions don’t matter to you.”

2 thoughts on “Crossing guards become a staple in their communities”