The town of Smiths Falls is eligible for funding to help clean up contamination at the town’s former water treatment facility on Old Mill Road.

The old treatment plant, which closed in 2010, was the subject of an environmental site assessment carried out for Molroz Engineering last year. Engineer David Hodgson presented the findings of the site assessment to town council July 17.

The site assessment found asbestos in some ceiling and floor tiles. Mercury was found in thermostats and fluorescent bulbs. Given the age of the building, some paint containing lead was also identified, said Hodgson.

Investigators also consulted historic documents, including a 1916 fire insurance plan which showed a foundry operating near the water plant, which could be another source of lead contamination. A second fire insurance plan from 1959 showed a nearby motor works, which could also have contributed to contamination. Hodgson said the Frost & Woods farm equipment factory (1839-1955) also occupied a site close by, but was located downstream and probably had a minimal impact on the water treatment plant.

Hodgson said the presence of lead on the site “will drive most of the future risk management work at the site.”

The town was notified in March that it is eligible for up to $40,000 in funding to help clean up the site through the Federation of Canadian Municipalities’ Green Management Fund.
This funding will help make the site more marketable to potential developers, councillors noted. 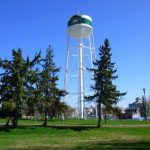