Farm Recreation Complex & the little town that could – Part III

It seemed improbable back in the mid 1980s that the little town of Perth could raise more than $1,000,000 to fund a recreation facility. Especially given the fiscally conservative mindset of many town officials.

Recently I caught up with John Willson and Lana March, who were both on the Conlon Farm Recreation Area fundraising committee back in the planning stages. They appeared in a 1988 photo of the groundbreaking ceremony along with three others, which accompanied the January edition of this column. We were able to get three of those original five together for a similar photo at Conlon Farm. The original ceremonial shovel that normally is on display at the Perth & District Community Centre is held by Lana March in the new photo — the same shovel held by Deputy Reeve Chuck Montgomery in the 1988 inset photo.

Willson and March were just two of the key players in the fundraising activities for Conlon Farm, but fortunately each brought different strengths to a unique team. Willson had spent many years as a lawyer, and served two terms on town council and on various boards and organizations.  March had a background as a physical education teacher, and was a councillor at the time. She later became mayor in August 1993.

The Perth Courier of Oct. 8, 1986 reported from the regular town council meeting that “Councillor Bill White says one of the fundraising methods which will be used is to pitch portions of the park to local businesses, industry and anyone else interested.  Phase one is expected to cost about $444,000 and a fundraising committee has been established.”  The estimated total cost for phase two was $563,300.

March recalled that she was a relatively new councillor for the Town of Perth in 1986.  “Bill White and I were on the recreational committee for the town. We put together a fundraising team, and team leaders were assigned different components, and I was in close contact with the mayor at the time, Lowell Yorke.  We soon met with the provincial minister and other officials in Collingwood. We gave a presentation, and you could tell all the locals in the room and other people from across the province were impressed. We had done our homework.”

It seems officials and citizenry back home in Perth were also impressed, as no obstacle was considered insurmountable thereafter. The delegation from Perth had earned a great deal of respect, and the level of cooperation from the town improved dramatically.

Willson also has fond memories of those heady days. “I got involved when there had to be $1,000,000 raised, and after receiving a phone call, became co-chair with Lily Pigott.  I had not known Lily previously, but was quite willing to help, and found that she was an energetic woman.  It only took about a month before we had our funding pretty well secured.  CBC heard about it, and CBC in Toronto called and we were interviewed. We had close to half a million from a Wintario grant, and the other half was committed by industry and groups and organizations who sponsored various parts of the facility.”

Willson remembered that as the committee went about their business, there always seemed to be positive news.  “Although council at the time tended to be fairly conservative, we didn’t have any major roadblocks put in our path. Every time I go over there, I feel a sense of pride at having been involved.”

According to March, the name of the facility was debated for a while, but they soon had a consensus on the name Conlon Farm Recreation Complex.  She agreed that the committee found their comfort zone with Perth town council after funding was secured through the Wintario grant.  March also noted that Police Chief Ace Halladay and others were big supporters of a ‘no alcohol’ policy for events.  The alcohol-free policy would go a long way in giving Perth an outstanding reputation for staging events of all kinds.

Both Willson and March pay tribute to Deputy Reeve Montgomery, especially with getting the re-zoning of the land approved.  “It seems the right people were in the right place at the right time,” said March. “It was a good feeling to be part of a successful project of that nature. I feel we are all responsible for the success of our community.”  Recreation Director Bob Sauer was also commended by both for his “incredible vision,” including insistence on the need for a toboggan run.

Stay tuned for more on the birth of Conlon Farm. 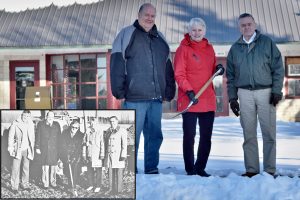