A trio of long-serving Smiths Falls firefighters were saluted for dedicated commitment to community safety and saving lives during a packed retirement party on Jan. 31 at the Kinsman Hall. With a combined 84 years of front-line experience, Rick Laming, Don Lackey and Bill Hurlbert were feted by town councillors, fellow smoke-eaters, and their tight-knit, supportive families for decades of living on call 24/7 to respond to everything from traffic accidents and fires to medical emergencies and false alarms. 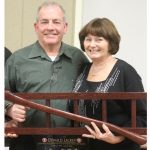 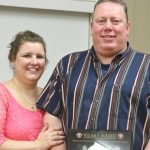 Bill Hurlbert and his wife, Shari-Leigh, thinking about what they’ll be doing now that they’re no longer on-call to respond to emergencies. 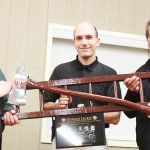 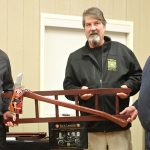 Laming, who joined in 1977 as “a young guy full of vinegar” looking to try something different, has witnessed major changes during his career, from increased focus on fire prevention via smoke alarms, by-laws and improved construction to hi-tech firefighting equipment. A Captain for 20 years, Laming is particularly proud that no firefighters were hurt on his watch. Along the way, he recalls significant incidents where lives were saved as well as traumatic outcomes that can have a deep impact on first responders.

Laming celebrates the spirit of camaraderie and mutual support among his team members. “When you’re on the job, you look out for them and they look out for you,” he says. But he also credits his wife of 40 years, Donna, with being a supportive and compassionate listener who often talked him through unpleasant post-shift debriefings.

Donna says she “married into the profession” and grew used to the unique challenges it posed. While raising three children, she befriended other firefighters’ spouses, transitioning in her relationship with them over from “a kind of daughter to a sister, and then at the end I was like a mother,” she says.

For retiree Bill Hurlbert, 18 years of volunteer firefighting follows a family tradition. His father and grandfather served in Smith Falls (and his father hired Laming). Hurlbert credits flexible employers in town with allowing him to drop everything when calls came in.  Like Laming, he too has witnessed major advances, such as the use of foam to blanket a fire scene, preventing the rekindling of embers.

“You’ve got to be a little crazy to run into a burning building,” Hurlbert laughs, adding, “it’s certainly not for everyone.”

Don Lackey, an electrician born and raised in Smiths Falls, is especially enthused about his 26 years as a volunteer firefighter. “It’s a great life because you’re giving back to your community, and Smiths Falls is such a great place to raise your family,” he says. Lackey’s son Ryan also volunteers with the Fire Department, and to him it’s second nature that “when the call comes in, whatever you’re doing, whether out on the soccer field with your kids or playing in the backyard, you’ve got to respond.”