Students in the construction carpentry program at Algonquin College Perth Campus are combining a fantastic learning experience with the opportunity to give a family a brighter future.

The Perth Chapter of Habitat for Humanity was founded in May, and already construction of the chapter’s first home, located on Arthur Street in the Perth Works subdivision, is well under way.

Algonquin building trades students have already built several homes in the subdivision as part of their curriculum. This is their tenth building project, and their first for Habitat for Humanity.

“We wanted to build with habitat because it’s a good organization,” said Perth Campus Dean Chris Hahn. “It combines a learning opportunity with social responsibility.”

Habitat for Humanity’s mission is to build simple homes for low income families. But, said Perth chapter chairman Allan Brown, the organization does not simply give away free houses. Habitat for Humanity is still in the process of choosing a family to live in the new house. In order to quality, the recipient family must have an income between $39,000 and $59,000 a year, and will be required to pay the mortgage – which will be interest free.

“In lieu of a down payment, the family is asked to commit to 500 volunteer hours,” added Brown. This volunteer work may involve taking part in the construction process, fundraising for Habitat for Humanity, or helping other families.

The recipient family will be one with a stable environment, but unable to afford the house through a conventional mortgage. Research conducted by the Canada Mortgage and Housing Corporation (CMHC) showed that 58 per cent of families benefiting from the program reported that they were better off financially, and 65 per cent reported that their children’s confidence had improved.

The value of the new house, which has been under construction since Sept. 8, will be about $250,000. It will be a two-storey, four-bedroom house with 1,585 feet of living space. The construction project has benefited greatly with support from members of the Lanark Leeds Home Builders Association who have donated both materials and labour.

The town’s contribution has included waiving the usual building and development fees. The project also benefited from an unexpected gift when $10,500 raised in an auction of sculptures produced in a stone carving competition this summer was donated to Habitat for Humanity.

A dozen advanced construction carpentry students have been working on the new home each Wednesday under the direction of college professor Lachlan Oddie. The project is to be completed by the end of April. “We’re on schedule,” said Hahn. “The target is that before Christmas it’s all closed in so we can work on the inside during the winter.”

Mark Bell, another Perth Campus professor who has been involved in the project while on sabbatical, noted that some of the students have actually volunteered to work outside class time. “They’re actually giving to the community as well,” said Bell. “I would say it adds an additional feel-good aspect to it.”

Current members of the Perth Chapter board, in addition to Brown and Hahn, include Jack Taylor, Karen Wilson, Glenn Tunnock, Julie Stewart, Rick Bugby, Alison Alexander (president of the LLHBA) and Sandra Oey, builds and chapters project manager for the Great Ottawa chapter.

Submitted photo (main image): A crowd of well-wishers and dignitaries gathered for a ground-breaking ceremony on Sept. 8 to mark the start of construction of the Perth Chapter of Habitat for Humanity’s first Perth home. 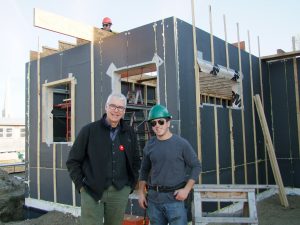 Photo by Chris Must: Chris Hahn, dean of the Perth Campus of Algonquin College, left, chats with second-year construction carpentry student Ryan Dozzi on the site of Habitat for Humanity’s first Perth home.