A 120-year-old Carleton Place Hackberry tree will stay standing for now after a Dec. 12 discussion at the town’s planning and protection committee prompted by a developer’s plans to remove it in favour of a traffic circle.

A three-phase development to build 56 residential units in an existing stone building, followed by a commercial space and restaurant, was approved in principle by the committee, but only the first phase was given the go-ahead since it would not require any interference with the tree. 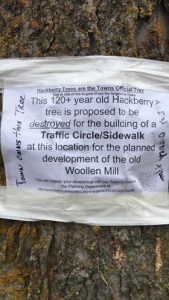 This sign on a beloved Hackberry in Carleton Place prompted citizen action leading to a council decision to investigate how best to protect the 120-year-old tree. (Photo: Emily Nicole Stanzel)

According to councillor Sean Redmond, when the second two phases of the project are ready to move forward, the developer will need to come back to council for approval. At that time, any potential issues regarding roads and the tree could be re-examined.

“But it better not include anything to do with the Hackberry tree on town property because it will not be coming down if it is healthy,” Redmond told Hometown News. “I am sure there’s alternatives that can be worked out to save that tree.”

Redmond noted it is an old tree, and that next steps include bringing an arborist on board to assess the Hackberry’s health and life expectancy. He said that although there are signs of decay, the ultimate goal is to determine if action is needed to preserve the tree over a long term.

In the meantime, hundreds of local residents have signed a petition (https://www.thepetitionsite.com/560/306/086/save-the-hackberry-tree/) started by lifelong Carleton Place resident and self-described nature-lover Emily Nicole Stanzel, 21, who walks by the tree at least twice a week. She recently noticed a sign taped to the bark warning of the tree’s potential demise to make way for a traffic circle.

“I took a moment to place my hands on the tree, and I began to feel sorry for it,” Stanzel told Hometown News. “It would be such a shame if they cut down such a big tree. And if they cut down one, God knows how many others might follow.”

Stanzel pointed out that the Hackberry tree is a key part of the historic William Street neighbourhood, where older houses and large trees give the area a distinctive feel that is unlike the flattened landscapes that nowadays make up many a suburban community. She also pointed to the Hackberry’s importance as a medicinal source long used by the region’s Indigenous people.

Carleton Place is home to the largest stand of Hackberry trees in eastern Ontario, and as such they serve as the town’s official tree. Local writer Linda Seccaspina notes that the tree’s fruit has been used “to treat abnormal menstrual flow, colic, peptic ulcers, diarrhea and dysentery as well as being used as a pain killer. Even modern scientists have begun to recognize the tree’s antioxidant and cytotoxic properties.”