The Thorbjornsson Family hosted the Hawthorne Mill open house on Saturday, Aug. 26 from 9 a.m. to 4 p.m. in Carleton Place. The event promised to be a day of fun and exploration and it didn’t disappoint.  On display was a collection of items from the Mill’s working history, postcards and photos from the site and South Shore Landing Inc.’s new vision for the site.

Many locals trekked through the four floors of the 146-year-old mill to explore the history and the future of this unique and iconic Carleton Place landmark. 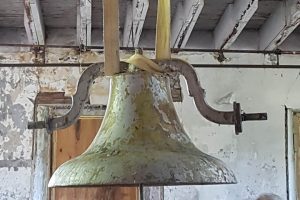 The bell was taken out of storage from the Carleton Place and Beckwith Museum and returned back to the mill.

The Hawthorne Bell, which had been removed from the site in the 1980s was returned to the top tower after being storage at the Carleton Place and Beckwith Heritage House.  For a $2 donation you could ring the bell, and throughout the morning you could hear it chiming through the empty halls.

Developer Wally Thorbjornsson was on site to explain the four phase plan for the site. Phase one is slated to start in early 2018 with the main mill building. The plan is for 32 to 48 one- and two-bedroom apartments while phase two will transform the current red brick building into 24 to36 units. The highlights of Phases three and four include the addition of community cornerstones such as a general store, pub and coffee house.  There are also plans for each building to have a rooftop community space, docking space, pools and courtyards.

Thorbjornsson said, “We’re very excited with the response to the open house. Far more tenants and buyers that are ready to sign up to occupy these condos showed up today than we could have imagined. People love the plans and our vision.”

Visitors had positive feedback for South Shore Landing, saying the company is bringing something new and exciting to the area and “really stepping it up in Carleton Place”.