Saturday, September 8, 2018 is the date for the 2nd Annual Parkinson SuperWalk Lanark North Leeds which again will be held at Conlon Farm, 109 Smith Drive in Perth starting at 10 am. The event will be held rain or shine with music, food, demos and information about Parkinson’s. Patricia Boal, CTV Ottawa News Anchor will emcee and Mayors John Fenik and Shawn Pankow will be there to lend their support.

The relaxed 2 km or so walk around the park and adjacent neighbourhood however is not the most important goal of the walk. “The day,” says co-chair of the walk, Gayle Truman, “marks an opportunity for people with Parkinson’s Disease to come together for a common purpose; to raise funds and awareness while having fun at the same time.”

Last September, the notable success of the first local SuperWalk (over $31,000 was raised), underlined the need for increased services in Lanark North Leeds. Since last year’s walk, a support group and two new exercise programs have opened in Smiths Falls. An educational event was organized through the Ontario Telemedicine Network as part of Parkinson’s Awareness Month last April bringing the expertise of a leading researcher and neurologist and neuro-physiotherapists to Lanark North Leeds and information sessions have been organized with local health care providers. 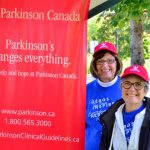 Parkinson’s is the second most common neurological disease with over 100,000 people living with it in Canada. It is a chronic and progressive disease, meaning that symptoms continue and worsen over time. These range from loss of smell and muscle rigidity to tremor and depression. The obvious symptoms are usually the tip of the iceberg, with many others not apparent to most people. The average age of diagnosis is 62 with 30% diagnosed before the age of 50. By 2031, it is predicted that the number will double and the County of Lanark Leeds and Grenville, with the highest percentage of seniors in Ontario and already under-serviced, will face a particular challenge. “While there is no cure for this chronic and progressive neurological disorder, early identification and diagnosis of Parkinson’s Disease is important so that people can educate themselves about what they can do to help delay the disease,” says Pat Evans, local advocate and a person with Parkinson’s, “People seem to be diagnosed much later here than they would be in an urban area. The reasons for this are not clear but access to specialists may be one factor. There may also be increased isolation because of distance and worries about being judged or stigmatized may prevent people from talking with their doctor.”

Dan Linton, a Smiths Falls resident who is 48 says that he had had symptoms since he was 38 and that diagnosis was only confirmed when the medication was prescribed. “It took a long time for me to be diagnosed because they weren’t expecting a 38-year-old to have Parkinson’s. But not everyone with Parkinson’s is 60 and has a tremor. That is why we need to continue our efforts to educate the public as well as health professionals about the disease.”

To register as an individual or team, to donate or to get further information contact Alan Muir at 1 (800) 565- 3000 ext. 3427 or visit online at donate.parkinson.ca/lanarknorthleeds

John Perrin was a member of the team of carpenters who built the Keyhole House in Smiths Falls in 1892. During its construction, he left his signature on the back of a door frame in a second-floor bedroom. The following year, John married Annie Weekes. Tragically, seven months later at the age of twenty-seven, John […]