Royal Canadian Legion Branch 95 members left Town Hall happy Monday after the Committee of the Whole meeting in Smiths Falls. The Legion has been looking for approval from the Town for a place to build a concrete pad for the Light Armoured Vehicle (LAV) III its had waiting since December.

Monday they got that approval; it’s going where they wanted — between the WW II memorial and the Gerry Lowe outdoor rink.

Town staff, on the other hand, were probably not. This was not their choice. They chose Alexander Park on Condie Street near Roger Stevens and Hwy 15. They had valid reasons for wanting it there — “space to incorporate seating and planting areas for reflective needs, and space to expand the use if required.” Also in the works is the thought that as the Park is in need of a “redesign”, that this could act as a cornerstone to the redesign. 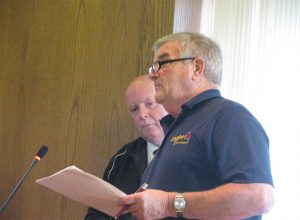 Councillors Maloney, Cummings, Allen, Brennan and Gallipeau, as well as Mayor Pankow, all sided with the Legion in its quest for visibility.

“It’s not visible there (Alexandra Park),” said Maloney. “I’d like to see it in a visible area to honour our vets.” Gallipeau agreed. Brennan pointed out that many Service Clubs had raised money and that “those who raised the money expect to see it.” Cummings commented, “If the Legion wants it in a prominent location, I’m not going to second guess them.” Both Councillor Allen and Mayor Pankow agreed as well.

Jim Jenkins, President of Branch 95 said the spot was chosen by the Legion and asked for about eight months ago; since that time, and over the past year, Service Clubs and individuals have raised nearly $20,000 for the armoured vehicle. It’s been paid for since December, he added. It cost $17,500 to buy, $20,000 for the hard stand with rebar and steel posts, and $3,000 to bring it from London ON including a crane to put it in place.

The vehicle itself has eight rubber tires. Jenkins says it won’t be sitting on the tires as the tires will sit on steel posts embedded in the cement. “There will be no weight on them.”

The LAV III will act as a memorial to Afghan war veterans. The Legion will provide a fenced structure and signage to prevent the public from accessing the LAV III as a climbing or play structure, and to prevent it being climbed on in any way. The Legion will also provide regular and required maintenance on the structure within the fenced area, and the structure itself. The Town will cut the grass and provide a space.

Jenkins said there will be a dedication for the monument during Ontario Legion Week on Sunday, September 16.

This is the latest craze in the wine world. I will concentrate on just a few Orange wines from Ontario, B.C., France and Spain. We just returned from a long weekend in Niagara-on-the Lake staying at a beautiful and relaxing B&B. Our first stop was to say hello to the Winemaker, Ann Sperling, but we […]