Reading campaign at Caldwell Street PS gets kids fired up

What’s better than it being Friday? Riding to grade 1 in a fire truck, of course! On Friday, March 24, grade one student Landon Hayward was dropped off at Caldwell Street Public School in an Ocean Wave Fire Company fire truck with Deputy Chief Dave Joy. Hayward’s fellow students cheered him on from the front of the school as the truck pulled up with its lights on and sirens wailing.

Last month, the parent council at Caldwell Street Public School organized a new initiative called Caldwell Reads. The campaign required grade one, two and three students to demonstrate their literacy skills in a variety of ways for two and a half weeks for the chance to win some great prizes. Three students won the first place prize of riding to school in the fire truck.

Hayward was the first to experience it. He had a big smile on his face when Chief Joy helped him down the steps and placed a firefighter’s helmet on his head.

“This reading campaign was a really awesome way to get students excited about literacy and reading,” said Principal Casey Nelson who helped the parent council organized the campaign.

Some of the other Caldwell Reads prizes included breakfast for eight students cooked by Nelson, Chapters gift cards and tickets to an Ottawa Senators game.

“We think it’s important to teach our students grit. We want to teach them resilience and persistence in all things in life, and this reading campaign was a great way to do that,” Nelson said. “They liked the incentives.”

“I really wanted to do something fun for the students and parents and for Caldwell in general,” said Kate Murray, co-chair of the school’s parent council.

The next lucky winners will ride to school in a firetruck in the next two weeks. “It worked out because there was one first place winner in grade one, two and three,” said Nelson. “That didn’t happen on purpose but it’s really awesome.” 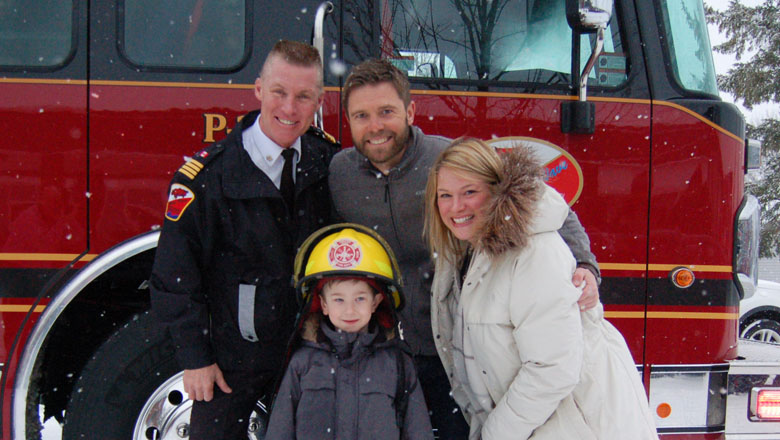 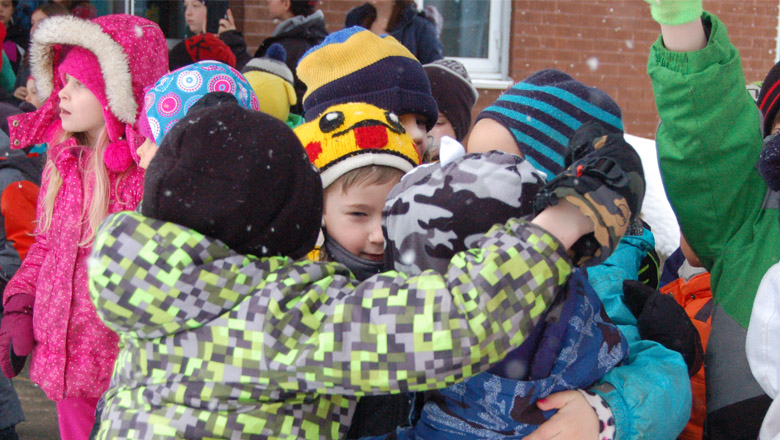 Landon Hayward is hugged by fellow grade one students after riding to school in a fire truck on Mar. 24, 2017. Photo Jane Hobson