In a unique approach to Lent that is accessible to anyone regardless of their faith, Royal LePage Advantage Real Estate Brokerage in Smiths Falls launched a local 40 Bags for 40 Days initiative on March 1 that encourages community members to declutter, repurpose, share, and donate a bag of household items up until Easter.

Inspired by an annual American campaign begun in 2011 by blogger Ann Marie Heasley, who shares tips on embracing a simple life, the Smiths Falls realty firm joins some 50,000 individuals and groups across North America participating in this year’s different approach to spring cleaning. With an underlying environmental message that unused or unwanted items do not belong in landfills, the campaign also focuses on the intentional building of community links by seeking out individuals and groups in need of what’s otherwise gathering dust at home.

Royal LePage’s Jennifer Aunger-Ritchie jokes that “as realtors, we love anything that helps declutter. It’s amazing to see what you’ve become accustomed to keeping on your nightside table that sits there for months or years and you’ve never moved it.”

Aunger-Ritchie says the initiative also encourages community connection, given that people donating goods may meet for the first time, or friends exchanging items may get together for a coffee and catch-up chat.

Lent is traditionally a time for giving up something, and while Pope Francis recently discussed ideas like releasing hate or fear from one’s life, Aunger-Ritchie adds that “maybe it is not so much about denying yourself something, but instead bettering yourself by simplifying your life and your home by giving back to the community.”

Royal LePage is not collecting bags, but it produces daily Facebook posts on cleaning and simplifying living spaces as well as where donations can be made. “Most of the realtors at our firm have taken it on and we’re having so much fun with it,” Aunger-Ritchie says, adding, “This is in keeping with the spirit of our company, where you’d be hard pressed to find a realtor at our firm who does not volunteer in some sort of capacity.”

Other initiatives her firm will be supporting include the Tammy’s Nails purse auction in support of Big Brothers, Big Sisters. “Lots of women hold on to lots of purses, so this is a great chance to get them out of your home and donate them to this charitable function,” she says. Other ideas include donating linens to the Lanark Animal Welfare Society and groceries to the food bank, especially since “they don’t just need food at Christmas time, but year round.” 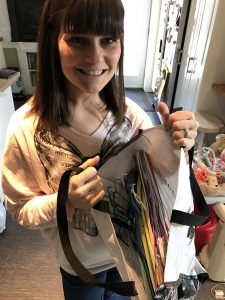 Royal LePage Realtor Jennifer Aunger-Ritchie, an active participant in the 40 Bags for 40 Days initiative, prepares to donate a bag of surplus hangers. Photos by Matthew Behrens

This article first appeared in the April issue of Hometown News.

One thought on “Repurposing, recycling, reusing, decluttering for 40 days”