Life on the Farm: Rhubarb

Have you ever paused to think about it?  How, by the time the snow melts and things begin to turn green, we are desperate for anything – anything at all – that is growing and edible.

We search the cool, damp earth in the garden for a sign of them.  Those eager, light-green sprouts, which in a matter of days will be nearly knee-high stalks.  The leaves themselves are poisonous, and the red-green stalks – on their own – are tart enough to make you pucker.  Yet, we watch for them with an anticipation like no other.

Is it because we love the taste…or because its arrival is one of the first trustworthy signs that winter is finally over and the growing season has begun?

Perhaps a little of both.

It does make one wonder though: if rhubarb season was in August, would it be nearly as exciting?

It’s a moot point though really, because rhubarb season is upon us now!  While there are some farmers in Ontario producing it indoors throughout the early months of the year, the traditional season for this revered vegetable (yes…it IS technically a vegetable) runs through May and early June.  It can extend longer if the summer proves to be a cooler one and not too dry.

The season is relatively short, and rhubarb tends to yield quite profusely.  The question then becomes, “What do we do with it all?”

A long-time favourite from the kitchen at Miller’s Bay Farm are ‘Rhubarb Pie Muffins’.  (See recipe on this page.) Don’t even ask for the nutritional information. It’s true – they’re more like a cupcake with some rhubarb thrown in…but they’re oh-so-tasty.  Plus, we’ve all just endured one of the most ridiculous spring seasons in anyone’s memory. Consider this little ‘splurge’ your reward for that!

Foodland Ontario suggests that ‘Rhubarb cooked as a sauce is a favourite. You can also make it into a custard pie, baked crumble or crisp, use in sweet-and-sour chutneys, simmer it in a sugar and ginger syrup to make compotes – or even juice it.

It’s a good partner with other fruit, such as strawberries, in pies, tarts and preserves, because it tends to take on the flavour of such fruits.’

If you are fortunate enough to have a rhubarb patch of your own, how can you make the most of it?  Here’s a tip: When those seed pods shoot up, remove them right away. Just take a sharp knife and cut them off as close to the base as possible.  This will allow the rhubarb to keep producing for longer, giving you time to cook up all of those favourite creations, and maybe some new ones as well.

There’s one more good reason to keep that rhubarb patch producing.  What goes better together than strawberries and rhubarb? Fresh, local strawberries should be ready by mid-to-late June.  Guess what we’ll be writing about for the next issue….! 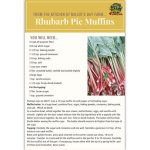 From the Kitchen at Millers Bay Farm
Rhubarb Pie Muffins

Preheat oven to 400°F. Lin a 12-cup muffin tin with paper or foil baking cups.
Muffin batter: In a large bowl, combine flour, sugar, baking powder, cinnamon, baking soda and salt. Whisk to blend.
In a medium bowl, whisk together the sour cream, melted butter, eggs and vanilla until smooth. Lightly stir the sour cream mixture into the dry ingredients with a spatula until the batter just comes together; do not over-mix. Fold in diced rhubarb. The batter will be thick. Divide batter among the muffin cups. The batter should mound a bit higher than the tops of the cups
Topping: Combine the sugar and cinnamon and mix well. Sprinkle a generous 1/2 tsp. of the mixture over each muffin.
Bake until golden brown, and a pick inserted in the center comes out clean, 18 to 22 minutes. Transfer to a rack and let the muffins cool in the pan for 5 to 10 minutes. Carefully lift the muffins out of the pan – if necessary, loosen them with the tip of a paring knife – and let them cool somewhat. Serve warm.

This article was first published in the May 2018 issue of Hometown News. For more articles from our May 2018 issue, pick up a print copy at a local retailer (find a list of locations here) or read our digital version.