The next time tourists make the loop at 1 Hershey Drive looking for a chocolate shop they will find one and much more as the Tweed Visitor Centre officially opens Aug. 25.

“It would be completely impossible not to bring back what was here, what is here and now it’s
back,” said Bruce Linton, CEO of Tweed.

He is referring to the newest product on the shelves at the visitor centre – Hummingbird
Chocolate bars. This quality-first company began life in 2012 in Almonte and recently moved
into Tweed to help the company pay homage to the factory’s beginnings as the Hershey
Chocolate Shop, while forging ahead with a new story. This story includes sourcing quality
beans from around the globe to make world class chocolate, which has earned them 60
international awards including the 2016 Golden Bean (U.K.) for their Hispaniola 70 per cent.

Media met up with Erica and Drew Gilmour of Hummingbird Chocolate during a private visitor
centre tour Aug. 23. Mrs. Gilmour said the opportunity to work with Tweed and be part of their
visitor centre guided tour was too good an opportunity to pass up.

“We jumped at the chance to be part of it,” Mrs. Gilmour said.

The chocolate production is part of the walking tour inside the visitor’s centre, which will be
familiar to those who have visited the Hershey centre before. Linton said he consciously
invested in keeping the original walking tour layout as it was to help visitors connect the past
with the present.

“This is exactly where you walked when you were 10 years old,” Linton said.

Times have changed and with it another exciting tale of manufacturing success in Smiths Falls. Tweed currently has over 700 employees and growing as they prepare for the Oct. 17 legalization of recreational marijuana. This growth may include products like zero calorie cannabis beverages, which approved trails have been granted at the Smiths Falls site. Linton noted the two-storey 300,000 square foot expansion will house production of inhalable products.

“Looks like there’s no end in sight for Canopy Growth,” said MPP Randy Hillier in his congratulatory comments at the visitor centre media tour Aug. 23. 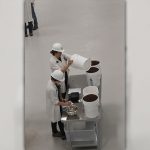 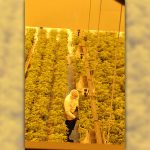 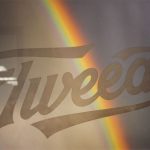 This photo is one of many that adorns the walls of the Tweed Visitor Centre walking tour. They were taken by the company’s artist in residence and was captured at last year’s Shindig event. Photo credit: Stacey Roy 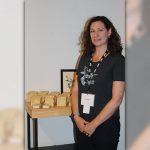 Erica Gilmour of Hummingbird Chocolate and her husband, Drew Gilmour handed out chocolate bars to visitor centre guests Aug. 23 as part of the Tweed Visitor Centre tours. The chocolate company has set up shop inside the Tweed plant in Smiths Falls bringing chocolate back to the building after a decade’s absence. Photo credit: Stacey Roy 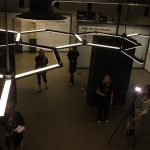 The lighting above the sensory experience at the Tweed Visitor Centre is in the shape of a THC molecule. Photo credit: Stacey Roy 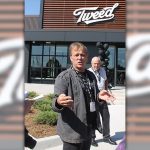 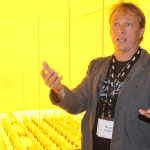 Bruce Linton, CEO of Tweed explains the production process of the marijuana plant at the last window of the walking tour Aug. 23. Photo credit: Stacey Roy

Inside the Visitor’s Centre

This weekend is all about showcasing the new visitor’s centre, which is made up of several segments.The centre will be open Monday to Sunday 10 a.m. to 6 p.m. Upon arrival, visitors enter into a welcoming lobby where they will be carded (only those 19 years of age and older may enter). The first room is the History Hall where unique cannabis artifacts are on display, including materials from reefer madness, the time when people thought the plant would make you crazy. Linton notes this is a thing of the past in Canada, but that education, such as that which the new visitor centre will provide, is crucial in undoing 90 years of prohibition on the plant.

“Canada is so far ahead of the rest of the world it’s incredible,” Linton said.

It was in 2001 Canada created the Marijuana Medical Access Regulations, which acknowledged
the medical benefits of marijuana and allowed its use in certain circumstances.

From the History Hall you move into the life cycle of the plant to an explanation of how cannabis moves through the body complete with a smart board outfitted with a human body attachment.

The sensory experience section is certainly memorable with lighting in the shape of a THC molecule and a long table full of marijuana scented candles and other smelling samples. From here visitor will climb the stairs to the original shop tour and see the entire production of both the Hummingbird Chocolate company and Tweed cannabis products.

Paul Cadeau has walked these halls for many years. He currently works with Tweed as a consultant, but saw the closure of the Hershey Chocolate plant in 2008 as a manufacturing manager.

“I never left the building,” Cadeau added of his impression of the Tweed transformation. “I’m
really impressed. There’s a lot of effort gone into it”.

Smiths Falls Mayor Shawn Pankow had an opportunity to applaud Tweed on this effort, which has led to such unprecedented success, adding the impact to the town in tourism and investor interest has been “absolutely incredible”. It was five years ago this fall that council endorsed Tweed’s plans at the former Hershey plant.

Pankow said council at the time was optimistic, but “never in our wildest dreams did we anticipate what we have here today,” Pankow later added. “Smiths Falls will remain the cannabis capital of the universe”.

Linton has made it a professional policy to ensure all communities his company is involved with rise along with him. He sources all he can from local businesses and refuses to introduce a cafeteria in the plant, saying he would rather support local eateries such as C’est Tout Bakery on Beckwith Street who catered the Aug. 23 visitor centre tours.

The downtown bakery catered Tweed’s grand opening June 16, 2014 and was delighted to come back for the visitor centre opening this past week.

Visitors to the new Tweed Visitor Centre are welcome to come in as of this Saturday, Aug. 25 when the company will host the third annual Shindig on their property.