In his 28th and final budget for the town, veteran Carleton Place treasurer Phil Hogan has put together what most members of town council praised as a strong, forward-looking document that will see the municipal share of taxpayer rates increasing 1.97 per cent in 2018.

In practical terms, the average increase for a home valued $220,000 will be $28.60. In a town-by-town comparison that Hogan has presented to council in previous weeks, he pointed out that Carleton Place residential taxes are lower than in Arnprior, Kingston, Renfrew, Perth, Pembroke, Belleville, and Smiths Falls.

Councillor Sean Redmond was among those who praised Hogan’s final fiscal document during the Nov. 28 meeting of the policy review committee. “This is an excellent budget, it’s progressive, it’s looking to the future,” he said. 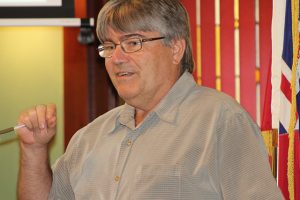 Soon to retire treasurer Phil Hogan brought in a 2018 budget that councillors praised as progressive and forward-looking, with a 1.97 per cent tax increase. (Photo: Matthew Behrens)

A week earlier, Mayor Louis Antonakos had asked that the budget be pushed forward for reconsideration in the hope that $30,000 in additional savings could be found, thus allowing the town to boast that its rates were in sync with inflation. At the time, he said inflation-based tax increases are critical branding opportunities that attract and promote development.

But when a staff recommendation came forward at the Nov. 28 meeting to accept the document as originally proposed, Antonakos said that he was “extremely disappointed that we couldn’t find some savings to achieve the goal of at the very minimum [the rate of] inflation.” Antonakos called this “a simple request for marketing purposes and messaging to our business community, our developers, our promotional literature. Inflation is a term that is used nationally, internationally. To be able to meet that standard is an asset.”

Antonakos agreed that Hogan had come up with what he called “a good budget, but to not find $30,000 to get to an inflationary number, with recent media reports that towns like Smiths Falls are coming in at zero, the county has come in at 1.4 per cent, I just don’t understand how we can pass budget so close to inflation yet at the same time find $400,000 to pave a trail and to spend $12,000 on a $200,000 statue.” The mayor was referencing both the signature Ottawa Valley Rail Trail initiative and the bicentennial project that will honour the Carleton Place-born WWI pilot Roy Brown, who was credited with shooting down the legendary Red Baron. Notably, that statue funding was not new spending, but a reallocation of previously budgeted funds for a mural project.

“Two weeks ago, I heard the term ‘nickel and diming’ in this room,” Antonakos continued. “That is a derogatory term in this room to me. We are responsible to the ratepayers of this community. And that means their nickels, their dimes, their quarters, their loonies, their toonies, and their bills.” He said he knows people struggling to pay their property taxes, “and so it might not seem like a lot to some of you, but I can tell you the long-term implications of that year-over-year going over inflation is not good for this community.”

Antonakos concluded that “for the purposes of a really great career in our treasurer, an excellent individual who has managed this community quite well, I will support this budget.”
Councillor Theresa Fritz took exception to the mayor’s comments, noting she will be out of work along with hundreds of others because of this week’s decision by Metroland Publishing and Postmedia to swap and close dozens of community newspapers.

“So my nickels and dimes mean a lot to me,” said Fritz, the managing editor of one of the papers whose doors will soon be permanently shuttered. “I’m not just a councillor, I’m a ratepayer. I don’t want to hear that we shouldn’t use those words, because they’re very real. I trust in our treasurer. [This budget] allows us to do all the things that we want to do. There are some big items we want to get done,” which among other things include street lighting upgrades, arena dressing rooms, watermain connections, the rail trail, sewage and water maintenance, and a variety of other local construction projects.

Fritz added that while running for office, she never promised inflation-tied budgets, but rather “reasonable” ones. “This is a good budget. I don’t believe we should be singling out our treasurer when he has done another wonderful job to bring this in. We were 2.1 per cent last year, we’re 1.97 per cent this year, we’re a growing community, and nowhere at any time in this discussion did I understand that if we brought our budget down we’re suddenly using it for promotional material.”

Despite his declaration that we would support the motion accepting the 1.97 per cent increase, Antonakos was the only member of council to oppose it when it came to a vote.