Project KITES is not just good for Eila VanWingerden, the 14-year-old girl SFDCI students have taken under their wing this semester; it’s also good for the 20 students doing the fundraising, putting a variety show together, and finding sponsors for the June 5 event.

Each semester over the last year-and-a-half, Breanna Bedor’s Gr. 12 English class has taken on the task of raising funds for Kids in Tough and Extraordinary Situations (KITES). For the last three semesters, three children have benefitted from their efforts – Everley Yolkowskie, Maverick Jonkman and now a local girl Eila VanWingerden. Eila was diagnosed with FOXG1 in 2014.

FOXG1 is a rare genetic mutation of the FOXG1 gene found in chromosome 14 which impacts brain development and function. The condition is characterized by seizures, inability to control body movements, and lack of speech. While the spectrum of abilities is quite broad depending on the exact genetic mutation, many children cannot walk or talk, and they struggle to communicate their most basic daily needs. Most cases of FOXG1 are non-inherited and have no family history.

When talking with Zoë Burns, 17, and Isaac Haskins, 18, from this semester’s program, it becomes obvious that not only are they gaining life and business skills, but their curiosity and compassion have been touched, too.

“Trying to raise awareness for things that are unheard of is hard,” Burns reflects, having now learned a lot about the syndrome. “[People] don’t know what FOXG1 is, and I think it’s nice to spread awareness of what’s going on in other peoples’ lives, to open their eyes. This is what this little girl is living with, what her life is like. It makes us not take our lives for granted, or our luck, or our health.”

Haskins agrees. Being a hockey player, and a “you name it, I play it” sports guy in general, he says it’s good to give back. “I like being able to help people. It’s nice to see people smile knowing I contributed to that smile.”

The Gr. 12 students don’t have to do this – it’s their choice. But as the two point out, it gives a good grounding in leadership skills and entrepreneurship. “It prepares you for things in the future,” Burns says.

There are five teams – media, fundraising, quilting, writing, and advertising. Burns and Haskins contribute to three – media, fundraising and writing. The theme for the variety show this year is By the Sea, and Eila was recently treated to a photo shoot with Chantale Irene Photography. The pictures will be on display at the June 5 event. 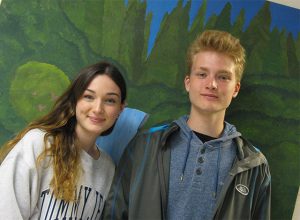 Burns and Haskins describe the teams like this: media adds to Facebook and sets up interviews, fundraising collects items for the auction (Joynt Auction Company), quilting makes a quilt for each child, writing provides sponsorship letters, and advertising gets the word out with posters. The money raised goes to the Paediatric Intensive Care Unit at the Children’s Hospital of Eastern Ontario.

Last year Burns says $2,700 was raised. Her “personal goal” this year is to hit the $3,000 mark. For that they need to fill the SFDCI Cafetorium to capacity – 200 people – sell all the tickets and have an exciting evening. The show will include bands, singers, a magician, “mostly kids from school,” and Eila will be there to take it all in.

And keep in mind that this evening is being run by, and has been promoted by the five teams that make up this semesters’ KITES project.