Take a hike with the Rideau Trail Association

Every week, groups of people set out on a joint journey to discover the wilderness that surrounds the length of Rideau Canal and its tributaries. This adventurous bunch belongs to the Rideau Trail Association (RTA), a charitable organization that has been running since its inception in 1971, when students from Queens University were tasked with mapping out a trail that ran from Kingston to Ottawa.

This 387 km system of trails has been trekked lovingly over the last several decades by the now nearly 900 members of the RTA. There are three clubs that gather to explore their regions: the Ottawa club, the Kingston club, and the Central club, the latter covering ground from Lally Homestead to Rosedale near Smiths Falls. 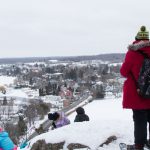 Looking out over Westport on Spy Rock. 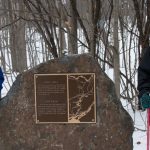 David Allcock and Rona Pyle stand next to the plaque that commemorates the opening of the Rideau Trail on Foley Mountain in 1971.

The Central club, though smaller than its two counterparts, makes up for it in dedication to their craft. I had the pleasure of going out on my first winter expedition with the RTA on Jan. 28, in the ups and downs of Foley Mountain looking over Westport.

I brought along a companion for support, and it was clear that we were newbies, since we showed up with only snowshoes, whereas the rest of the eleven hikers came with the choice of snowshoes or boot-spikes (icers); unfortunately for us, it was a boot-spike kind of day. Nevertheless we were welcomed with open arms. Although we were hiking nearly 8 km that day in wet snow (what the group would call a level 2 difficulty hike), the Central club isn’t the type to leave their fellow hikers behind.

Our hike leader was Jack Tennant, relative new to the club himself, having only joined in 2014. But Tennant quickly climbed to the ranks of hike leader and deputy chair of the Central club. He’s known to some as the “Passionate Hiker,” which also happens to be the name of the blog he uses to chronicle his outings. Tennant was as knowledgeable as he was swift, leading us at a steady pace through our three hour hike up what he called “heart-attack hill” (which we had to climb twice) and out to Spy Rock, where we caught a spectacular view of Westport down below.

Anna Cornel was the day’s sweeper. It was her responsibility to make sure that no one fell behind. Cornel used to be a physician and is now a RTA guide in training, and judging by Tennant’s praise of her at the end of the hike, she’ll soon rise up the ranks as well.

We set off, and we weren’t five minutes into the hike when Howard Robinson, a RTA hike leader and also a member of the Mississippi Valley Field Naturalist club, identified two young bald eagles hovering high above the mountainside. We traveled a bit farther and we encountered two deer watching us in the distance.

But the most astounding brush with wildlife happened when we reached the beach. As we looked out across the frozen lake, a coyote darted from the edge of the mountain off in the distance. We called after it, but nothing could keep the coyote off its course. There we all stood on the edge of the ice watching the lone coyote race across the length of bay, and disappear into the woods again.

The trail eventually led us to the beginning of the Rideau Trail itself, where we discussed who had been with the RTA the longest.

At first, most pointed to David Allcock, who had also had the task of assuring that private landowners would allow the club to walk through trails crossing over their property. He has been with the club for 11 years.

But soon it was discovered that Rona Pyle had been with the club for 15 years, and the whole group cheered her name in unison.

Allcock did win one competition that day.

“Are there any here over 80?” He asked. No one answered. It turns out Allcock is 79, and therefore the most senior hiker in the group. But that doesn’t mean that the Central club doesn’t have hikers over 80. In fact, the bulk of their group is made up of retirees.

Tennant said that he was called a youngster when he first arrived to the club, even though he too was retired.

Those involved in organizing the Central club’s activities work on a volunteer basis, but they take their responsibilities seriously. They are now invested in looking towards the club’s future. In 2021, the RTA will hit their 50th anniversary, and they have already invited their members to start imagining what’s next for the Rideau Trail.

The Central club is growing too. Tennant has been keeping statistics for the last several years, and 2016 was one for the records. It was the only year that the club averaged 10 hikers per outing, of which there were 80 in total last year. The hikes are open to unpaid members who want to try them out and yearlong memberships are available on their website.

First published in the February edition of Hometown News.