The stereotype of tattoo parlours as seedy joints tucked away in dark alleys has been upended by new-age art shops in Lanark County catering to a surprisingly wide range of individuals.

At Lea Maurice’s Ink & Iron Tattoo Co. in Carleton Place, there’s a relaxing spa feel as visitors aged 18 to 91 groove to a playlist featuring Blue Rodeo and the Tragically Hip. After a spell working in the addictions and mental health field, Maurice looked to where she could exercise her long-held artistic passions. She apprenticed with an Ottawa uncle (who actually gave her her first tattoo at age 17), and then set up her own shop in 2015.

Maurice says all of her tattoos have special meaning, and so she well understands that many Ink & Iron customers are desiring an image or phrase engraved on their skin  “because it reminds them of a significant person or time in their life. It can be very therapeutic, and it’s almost like a counseling session when they tell me their story about why they’re getting it. People call it ink therapy for a reason.”

She sees a lot of requests for memorial tattoos like exact-copy signatures that read “Love Poppa,” or replicas of a father’s police badge. “It makes them feel like there’s a piece of that person with them,” she adds.

Some 90 per cent of Ink & Iron’s clientele are women who gravitate to her specialized water-colour styles, and many are repeat visitors who have become friends. Her shop receives an annual health inspection, she uses only disposable equipment, and any new client is engaged in a detailed discussion to ensure that the individual is ready for a permanent change to their body.

Queried about the strangest request she’s received, Maurice laughs and says, “I don’t think you can put that in the paper,” though she does admit that the second most bizarre ask was for a curse word on an inner lip.

Maurice refuses to do swastikas or anything racist, and while she has no trouble helping a long married couple have their respective names tattooed on one another, she advises against individuals who have only been together for a month from undergoing the same.

While 18 is the legal age for individuals to get their own tattoos, Maurice will also consider the well thought out requests of teenagers who come in with their parents.

In addition to her tattoo work, Maurice dedicates significant time and resources to ending youth homelessness in Lanark County. As she dreams up new ideas to achieve that goal, Maurice also plans this year to get a tattoo portrait of her grandfather, “who was everything to me. It will be a daily reminder to me of how much I loved him.” 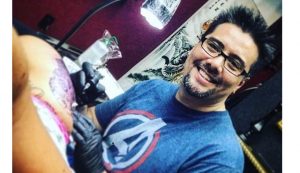 Curtis Wan of For the Love of Ink clearly enjoys his work as a successful Perth tattoo artist for over 12 years. Photo courtesy of Curtis Wan.

That love of tattoos is also celebrated further west in Perth, where a former hi-tech engineer, decided on a career change. Curtis Wan has run For the Love of Ink for a dozen years. He has a similarly large female clientele (75 per cent) and the majority of guests are aged 25 to 35.

“It’s one of the few ways we can truly customize ourselves,” he explains of the tattoo attraction. “A majority of it is showing the inside on the outside, what our feelings and character are, and it’s a very addictive thing. Your brain releases a lot of endorphins when you get tattooed, and anyone who comes in and tells me, ‘This is the only tattoo I am getting,’ is often in two weeks later getting another.”

Like Maurice, Wan says that he learns a lot about people, especially when he is doing a tattoo that can take up to seven hours (his longest booking ran 14 hours).

He too refuses to do anything racist, hate-filled, or demeaning. Wan says he won’t judge people as long as their requests fall within his moral guidelines.

He also is careful about where he puts tattoos on people. For example, if an individual does not already have tattoos on their neck or hands (necks are the most commonly requested area for tattoo removal) he won’t provide one in those areas.

“I get lost in the art when I’m doing it,” Wan says of his successful career switch. “Taking a piece of art and putting it on someone’s body and seeing them smile, or doing a memorial tattoo and they’re crying at the end? That’s really rewarding for me.”

Wan’s passion for art has taken him around the world, from Italy’s Vatican to Chinese Buddhist temples. He says seeing some of the world’s most famous artworks has inspired his daily practice. Like Maurice, he is also deeply involved in the community, having raised and donated over $25,000 for animal shelters and other local fundraisers.

As for those old negative tattoo stereotypes? Wan says he has seen dramatic changes in the business, from people wanting only tiny images inked on them to seeking whole arms done, including doctors and lawyers. “The stigmas are not even close to where they were 10 years ago.”

This article first appeared in the February issue of Hometown News. If you missed it, you can now read it online.