“Watch out Canada, because we are coming in!”

Brown said the company’s $16 million investment in its Canadian expansion will certainly pay off, thanks to the help of a great many local people.

“The people of Canada are absolutely terrific,” said Brown. “The Canadians say yes, and they want to help.”
As the world’s largest self-hire boat company, Le Boat currently operates 900 boats of all kinds. The company’s plans to expand into Canada date back to January 2015 when Le Boat staff were approached at the New York Holiday Show by a representative of the Ontario Ministry of Tourism, Culture & Sport with the idea. The official pointed out that Le Boat was the world’s largest company of its kind, but was operating only in Europe.

“We are bringing our luxury fleet here to the Rideau Canal,” said Brown. The company plans to operate 16 rental boats from its Smiths Falls base next spring. Half of those boats have already been constructed, and are in storage in Poland.

“On the 18th of May we will see some of our first passengers departing from Smiths Falls – and spending lots of money in your wonderful communities,” Brown assured guests at the opening of the Canadian headquarters. Representatives from several communities in Leeds and Grenville and the towns of Perth and Smiths Falls were in attendance. Some visitors from Australia were also present, since Le Boat has expansion plans for that country as well.

The Lockmaster’s House was derelict two years ago when the company began developing plans to move into Canada, but has been extensively renovated to serve as Le Boat’s sales and marketing headquarters for North America. Brown said operations will begin with five staff, later expanding to 10, and that eventually the company expects to outgrow its original headquarters.

Le Boat’s marketing of the Rideau Canal to its existing customers throughout the world began this month and “we are now 25 per cent sold for 2018,” said Brown. “If we can have 32 boats here by the end of year three, I will be delighted.”

“The exposure internationally that our little part of Canada is getting is amazing,” said Westport Mayor and United Counties of Leeds and Grenville, Robin Jones. “We are so proud that you’ve opened up your North American facility here on the Rideau.” 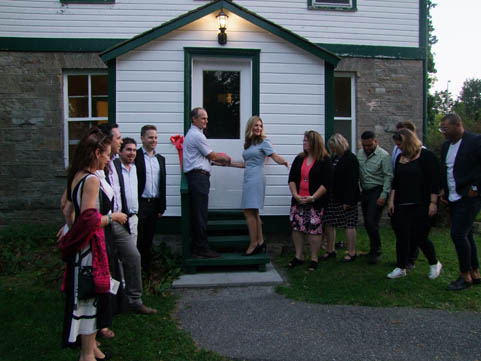 Surrounded by Le Boat staff members from both Canada and Europe, Managing Director Cheryl Brown cuts the ribbon at the company’s Canadian headquarters, the newly-renovated Lockmaster’s House in Smiths Falls. Photo: Chris Must. 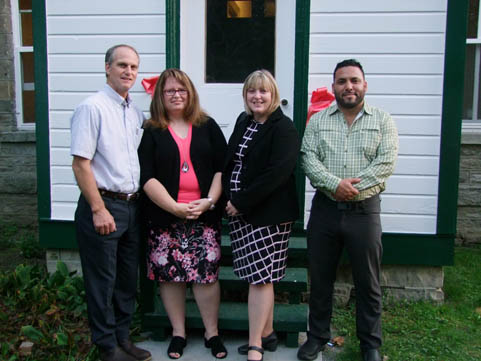